We don’t care much for buzzwords here at RadioAnalyzer, but ”hybrid” is one word we are taking very seriously. And no, we are not talking about cars and electricity, but more the concept as such.

In fact, we like the whole idea of mixing two existing technologies to create a new, smarter one, that we have developed our own.

From the world of ratings and digital meassurement we already know that most of the big players are working on hybrid models where respondents with or without audio sensors meet sen- sus numbers from the digital logs. One dataset is the backbone, the other one the pulse. We find that compelling and rich in perspective, and for the commercial department this will provi- de an excellent new opportunity to mold and shape the radio products better for the adverti- sers.

However, the hybrid model can dangerous if applied without thinking deeply about the methodology when it comes to programming and music testing. Putting too much weight on respon- dent based meassurement without audio sensors will make the results tilt and basically render them useless.

That doesn’t mean the hybrid technology in the digital meassurement area can’t be useful also in those fields of interest, but a lot of pilots and evaluation remain before the efficiency is clear.

We are also closely following the development of the ”connected car” in the different versions that are currently under development and testing – with special attention for the possibilities that open up when the listener is no longer stuck at the recieving end of a one-way signal. With an IP-based channel able to return information on reactions and habits, we are one step closer to basi- cally sitting in the car with the listener, observing how they use the product to better shape it to the needs of the driver.

When that technology becomes widely spread, it will be a huge gamechanger for everyone in radio or even just audio.

Our new hybrid product is not connected to the two examples mentioned here – but springs from the same idea of creating something new from something we already know.

A couple of years ago we built a data channel and an algorithm that collects, weighs and sorts digital consumption of songs on a country-by-country level. We initially called it ”SoMe Chart”, but have since renamed it ”Digital Hitlist” since very few social media channels offer enough data for us to include them in the calculation.

Thankfully other digital services do provide sufficient information for us to establish a reliable and stable image of the consumption of songs online. And it is this data channel we are now taking to the next level by making it a hybrid.

Sure, it’s interesting to know what the digital hitlist looks like. But it doesn’t even begin to tell the full story about ”what is hot” right now. The same can be said about the airplay charts, determi- ned exclusively by music directors at radio stations. And that is why we decided to mix them. 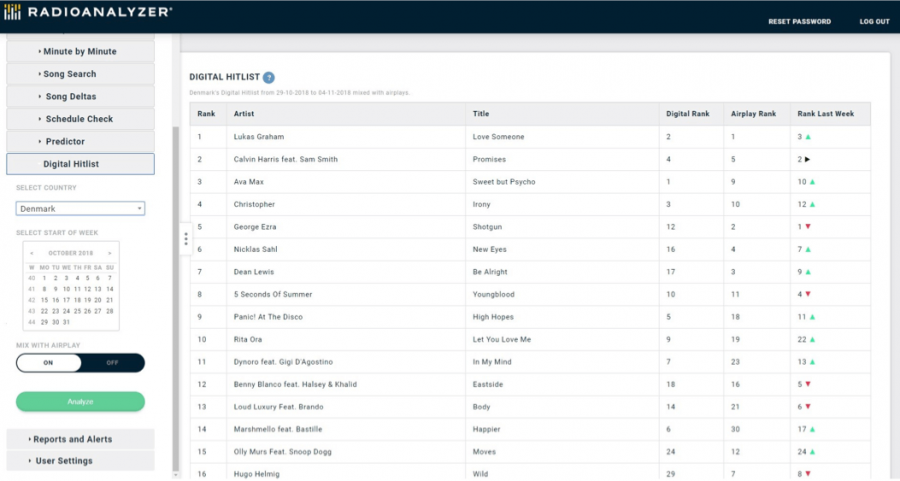 In all its’ complexity the Hybrid Chart is really a very simple contruction: If a song is number 1 on the digital top 100 hitlist in a given week it gets 100 points. If it is say number 30 on the airplay chart of the same week, it gets an additional 70 points.

It wasn’t until we saw the results of this idea that we really understood the efficiency and clarity it brings to the world of music charts. Now the ”pet song” of the music director community is no longer a guaranteed number one. And some freak song that a record company pushes into every auto-playlist in the world is no longer a safe bet for first spot in the streaming chart.

It is the best of two worlds forming a new unit that – in our perhaps not so humble opinion – is precisely what the hybrid concept is all about.

The first radio stations in our client portfolio are already planning to make the new Hybrid chart their new official hitlist, and we hope that many more will follow. It is delivered white label, so the radio stations can name, sell and even edit the chart whichever way they want.

And it is easy, because it comes included with a RadioAnalyzer Pro license so the stations can pull the lists right out of the tool on any given day and produce the hitlist show.

Feel free to get in touch if you have ideas or opinions that you want to share – or if you want to see the latest hybrid chart for a specific country.

If you want to see the hybrid hitlist in action