The Ties that Bind

Living in Europe, speaking more than one language, and working across several markets with several different languages is always a very eye-opening experience. It teaches you how incredibly different but also how similar we all are. One of the things I love asking clients about is regional sayings – proverbs, epigrams, aphorisms, idioms, and so on. One that seems to pop up in multiple countries I visit is some form of the following:

“if everything stays exactly as it is, things will never again be as they were”

It’s something we almost never think about on a day to day basis and are often quite puzzled as to why things aren’t working like they used to, even though we haven’t changed the winning formula.

Continue Being Great, Just Don’t Be the Same

Quick cut to a client meeting I had last fall: a CHR station was worried – their growth had stalled. At this time of year, he should have been seeing growth on the station. 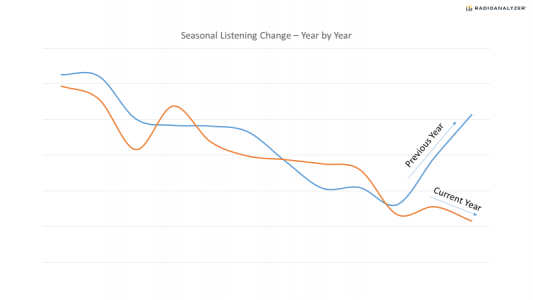 Since clients can track seasonal changes with RadioAnalyer they knew when to expect a change in listening due to a switch of seasons or the end of a school vacation, or if this was a real shift in behavior outside the norm. In their case, the station was flat to falling but should have been growing. The Program Director tells me:

“I don’t understand it, we didn’t change anything. We didn’t do anything to make them go away!”

Since we could see the expected seasonal growth on other stations in the market, we knew this wasn’t a general loss in radio listening. I countered:

“And what did you do to make them stay?”

Silence around the meeting room.

Often, we get so caught up in doing things right, it doesn’t occur to us to continually offer something new and compelling to keep our listeners interested. This is even more of a factor the younger your target audience is. Fulfilling the listener’s needs is only one part of the job. Making them want to listen to the station is just as important (Pro-Tip: this is also true for personal relationships. I wish somebody had told me this when I was 20).

Fast Forward to later in the year. The station nets a famous (and somewhat controversial) artist for their format to do some on-air shows for them, and – this is the important part – promotes the crap out of it… Boom! We see the numbers start to take off. 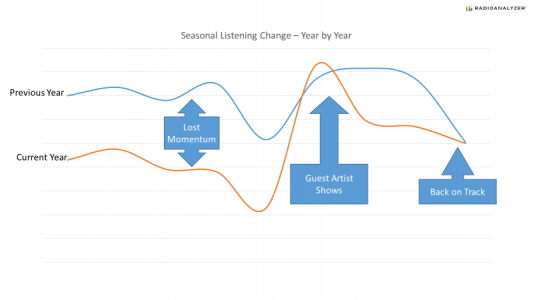 Yes, it was something small and limited in scope. Yes, it was something almost mundane: get an artist to do some shows. But it was something that got talked about. While some might be worried about the drop-off after the initial show, we weren’t. Comparing the seasonal listening data, we could see that the catalyst had been injected; while the initial boost from the promotion was stronger than what followed, listeners began to tune in regularly again, and the station was out of the stagnant regression and back in line with their regular growth curve.

What’s on the Table?

This little anecdote brings up two important points to remember when evaluating your long term performance:

With the overabundance of other audio options out there, both in the traditional and the digital market, it becomes so, so important to remain talked about. One of my earliest radio mentors used to ask: “What’s on the table?” a picture that’s easy to communicate. Sure, you gotta eat, but what do you want to eat?

How do you keep your listeners coming back for more? I’d love to hear from you, drop me a mail.

This website uses cookies to improve your experience while you navigate through the website. Out of these cookies, the cookies that are categorized as necessary are stored on your browser as they are essential for the working of basic functionalities of the website. We also use third-party cookies that help us analyze and understand how you use this website. These cookies will be stored in your browser only with your consent. You also have the option to opt-out of these cookies. But opting out of some of these cookies may have an effect on your browsing experience.
Necessary Always Enabled
Necessary cookies are absolutely essential for the website to function properly. This category only includes cookies that ensures basic functionalities and security features of the website. These cookies do not store any personal information.
Non-necessary
Any cookies that may not be particularly necessary for the website to function and is used specifically to collect user personal data via analytics, ads, other embedded contents are termed as non-necessary cookies. It is mandatory to procure user consent prior to running these cookies on your website.
SAVE & ACCEPT