Is a quote that has been beaten to death and dragged through just about every motivational meeting and back again. Funnily enough, it is actually a mis-quote – Aristotle never said these exact words – though he did say something similar:

“the whole is not the same as the parts”

This comes pretty close and honestly, the mis-quote is a lot easier to Instagram as a motivational poster. It also happens to quote often be true.

Music Directors: Your Job is Safe*

(* if you are more than a numbers-filtering machine)

One might accuse me of personal bias, as I was a music director for many years at a number of different stations, but I truly, truly, believe this. The most successful consultants of the past few decades have spent countless hours training MDs to play only the best testing songs and nothing else. This is essential still true: the foundation of your “musical carpet” should be tailored to your audience likes, but we need human (read: creative) brains taking new ideas and making great entertainment out of them – otherwise he hit a stagnant feedback loop in which nothing new every comes.

New ideas don’t always make sense on paper, but trial and error has always played a big part in content development in our industry. The great thing about trial and error today is: our tools to measure the reactions and correct the errors are much faster than they used to be.

Play Terrible-Testing Music and Talk too Much

That tagline might be a bit facetious, but it gets the point across. Taking a cue from throwback Thursdays, a client decided to try out a throwback music day on the station. Based on the age of the core-listenership, a 90s-Day was decided upon. The staff did their research and prep for the content, going with a lot of feel good throwbacks and embarrassing photos from their 90s phases. A DJ team was decided upon, and they were given a lot of leeway to deliver the content. This was not a typical formatted “shut up and play the song” affair (which was unusual for this station).

The music department also had their marching orders: an entire day consisting exclusively of 90s Music, and no repeats. Oh yeah, and it has to all test well… As any AC music director will tell you, there is no way to fill an entire day with 90s music and no repeats, and not have half of it test like crap.

Yeah, that’s what the song pool looked like on paper, so we had to get creative. The music director ended programming a great day of music. It had lots of variety and it felt great to listen to. On paper the test results for the individual songs looked “less than optimal”. Using the standard test filter for the “regular” programming the day looked pretty much like this: 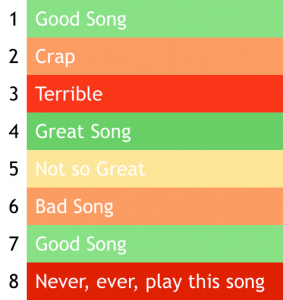 Not a great result in terms of individual (or even average) song appeal.

While the individual pieces weren’t the best-testing, optimum-formatted, short and to the point radio ever produced, the overall product was something new, interesting, relevant, and compelling. The overall atmosphere of the day, the pre-promotion that was done for the show, and the delivery by the DJ team and their interaction with the listeners (despite the lack of clean formatting) are what delivered. The day after the show we reviewed the listener data and were pleased to see a decent rise in overall listenership, a lot of it coming from outside of our core listeners. We decided to try it again next week. It worked again, and the next week… (you see the pattern here). Apart from the 4th week of the promotion (which was a regional holiday) it just kept getting better and peaked out around 20%. 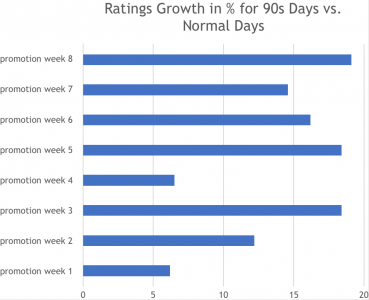 Now, we realize a 90s show is not a terribly innovative idea, but that isn’t the point. The execution of the idea was what made the difference. The real lesson here is: many things that, taken individually aren’t ideal, can together combine to create something great. Don’t get dogmatic in the details! Stay true to your brand and ideals, and follow your strategy, but take a step back to look at the big picture. Rate the overall product, not the individual bits taken out of context.

Music director – We are here to help you out

What are your “this really shouldn’t have worked, but it did” stories?

I’d love to hear them. Send me a mail. We can talk.