We talk a lot of accessibility of information and how to interpret it on this blog, but it doesn’t always have to be quasi-rocket science to be of use to you. Today we’re looking at something deceptively simple, but useful in a deeply layered way: Song Search

The biggest benefit of connecting all the data in RadioAnalyzer that we compile from airplay and market surveillance how easy it becomes to manipulate it. Need to find a song and show who is playing it? Not a problem. Enter a title, an artist, or just a portion of one or both, and Song Search will spit out your song. Let take “Never Let You Go” by Georgia, a song that’s currently on my phone’s playlist and one I found by using the New Music Function in our system (I talked about it here). So we type in “Never Let You Go” as the title and get the following list: 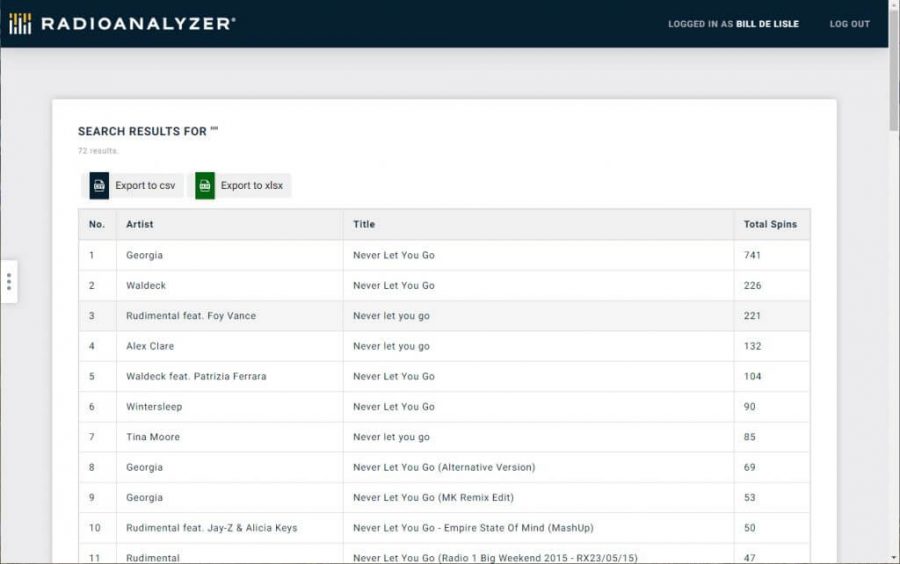 Notice we have grabbed every song that has that title, but we are only interested in the first one right now. By default, the list is sorted by most played song, but we could also sort by artist or title by clicking those columns. Back to the song in question, however, let’s click on that title to get a deeper view of the data behind the song. 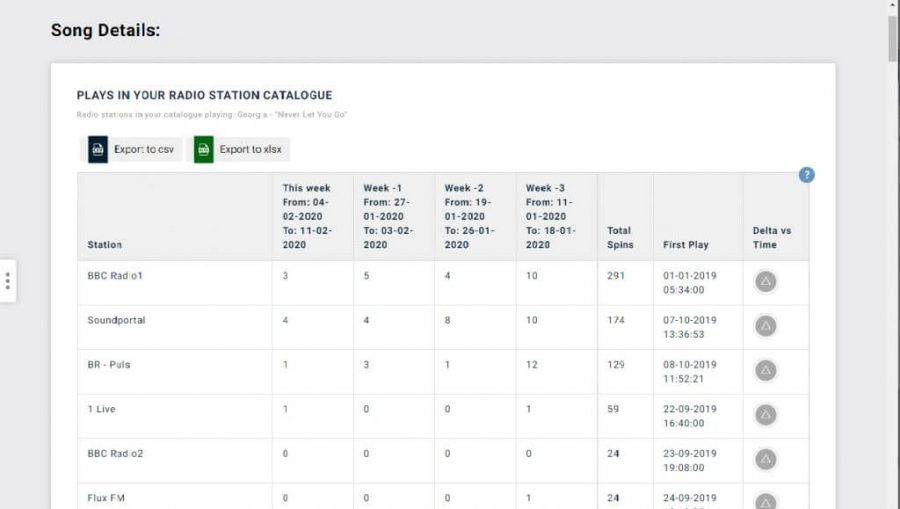 We can see all the stations we currently have in our library that play this song, sorted by total number of spins. We also see spins from the most recent 4 weeks, as well as the first time they played the song. A click on the station itself will also open a play window with the individual plays on that station. You can then explore further by clicking on individual plays and listening in to see if the station did a music sell or anything else relevant with the song on the air.

You also have the option of filtering for just a single station while song searching, if you are just trying to find a specific song on a specific station.

Sometimes its useful to go a step further in your manipulation of the data. Let’s take a specific scenario: Sting is on tour; you’ve got Tickets to give away and want to do a Sting special running up to the event in the evening. To avoid playing the same of 5 Sting songs that very listener has heard too often, you can drop “Sting” into the artist space in song search. Now we have a list of his most played songs, sorted by frequency. Just ignore the first 5 or 10 and check out the rest. 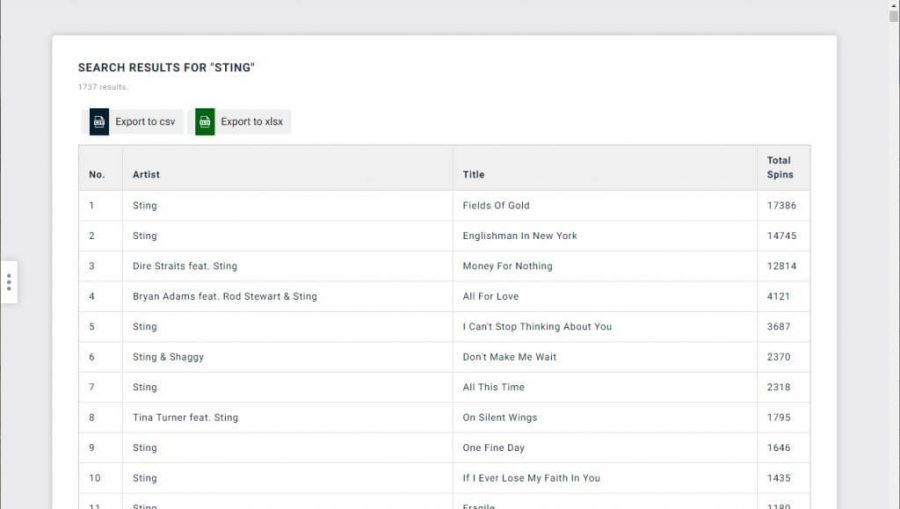 Love is in the Air

How about a different scenario (based on personal experience)? One of my favorite GMs from my past stations had a habit of coming of with spur of the moment ideas for music specials. One spring morning she walked into the office and said “it’s going to be a sunny and warm day today. I want a ‘bursting spring-bud top 3 hit songs’ special* at the top of every hour today. starting in 20 minutes”. Uhhh, ok…

*this is translated from German, it was actually “Der Knospen-Knaller Hit-Dreier”, which sounds much cooler when you say it.

As I write this, Valentine’s Day is around the corner, let’s put together a Cupid’s arrow fast list of love songs for a Valentine’s special. Just type “Love” into the title bar, and here’s your list: 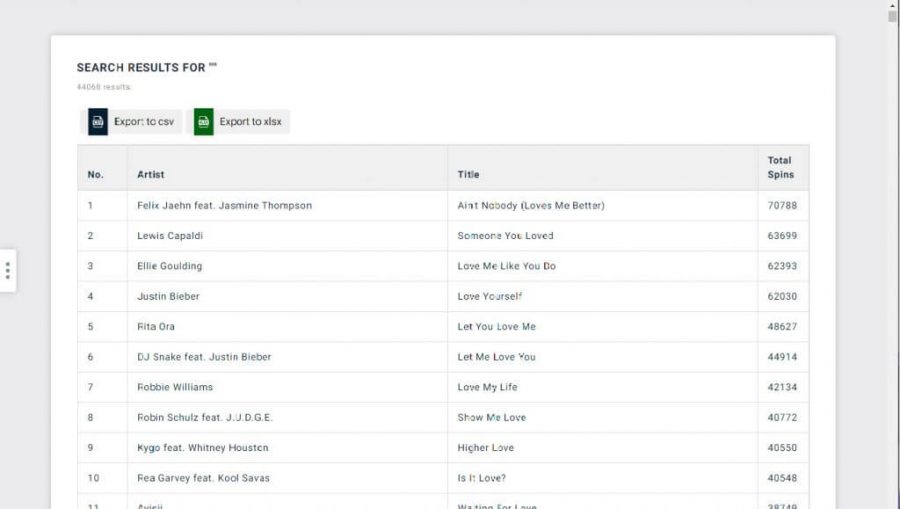 Last but not least – if you wan’t a quick video demonstration of How to Use Song Search, just watch here:

Looking for a fast and easy way to read your music data and the market? Drop me a line, I’m happy to chat.

P.S. yes, those section headers are song titles again. I’ve decided that’s my new thing, have fun with it.

You might say the poor guy never had a chance, being born to two radio-crazy ArmedForcesNetwork journalists that met in southeast Asia (think “Good Morning Vietnam” – and no, his dad is not Adrian Cronauer). Since discovering his love for music programming as a teenager, Bill has been obsessed with turning great ideas into numbers you can measure, and measured numbers into actionable programming strategies that make great radio. After touring Central Europe as a Music-Promotion-Programm- Director and a Research&Program Consultant for European and International Consulting firms, he has returned to the radio innovation trenches at RadioAnalyzer, and is loving every minute of it.

A True Gentleman Has Passed Away

Ten Key Takeaways for Radio in the Pandemic

An Apple A Day…

I’ve spent the past weeks in overdrive crunching more data than I have ever digested before on behalf of @RadioAnalyzer clients all over Europe.

Trend: listeners trust radio to deliver. Some channels are rewarded, others disappoint and are punished.

3 Christmas Promotions That Work… and 1 That Doesn’t

Music Sweeps and How They Don’t Work

Our Clients Grow Faster Than Others

Any cookies that may not be particularly necessary for the website to function and is used specifically to collect user personal data via analytics, ads, other embedded contents are termed as non-necessary cookies. It is mandatory to procure user consent prior to running these cookies on your website.