Music sweeps, John Wayne and Radio Stations – how are they all connected?

He had the slick vibe of a modern day John Wayne coming from afar to save us as the authority of Cool itself from the west. He almost spoke like the king of the prairie too; with that US twang and the deep, commanding voice.

I’m talking about the first radio consultant I came across when I was relatively new in radio. One of those journeymen we all know. The travelling salesmen of audio wisdom and target audience seduction.

I remember his words clearly. Because he had a simple message on music sweeps:

“Cut down your music database to the bone and do music
sweeps when your competition is on commercial and talk”.

It was his sermon, his mantra, his selling point. And from the looks of his bright white teeth and the expensive designer jeans, he was making more than an adequate living singing that song.

And we did as he said. Oh boy, did we cut our database. From 1400 to 200 songs over a year. We made so many music sweeps even the best broom would be exhausted just considering sweeping that much. Two in a row, commercial free hours, triple songs back-to-back. We did them all and even invented some new ones along the way.

We were successful too. Winning the market and making a good profit, so it was easy and logical to stay on the path he had plotted for us.

Lots of radio stations are still on that track – and from the looks of it, some of these journeymen still make a great living with their quick-fix and simple message. It also has the built-in advantage that they can keep draining the clients money for music testing and pep-talks endlessly.

Problem is: looking at the available data, we don’t see the desired effect. Sometimes we even see the opposite.

Going through thousands of on-air hours over the past 6 years I have become increasingly aware that there is no quick fix. You can’t become more attractive to the listener by default just by structuring your clock in a particular way.

But one thing is passive observation – another one is documentation, so I decided to make a sample of 100 music sweeps on 5 different radio stations. I wanted to see if I could find an overperformance or just measure any difference between the effect of the sweeps and the effect of an average break.

Here are some examples shown at the Clocks Function of the RadioAnalyzer tool:

Here the radio stations splashes out two x two in a row. Though general listening level (cume) is higher throughout the hour, that is not the thing to note here. It is important to look at development in listening over the two-in-a-row plays. The idea is to compare to what listening development you would expect from average listening numbers.

So the first double-play kind of works with a small over performance – but the second one, coming very shortly after the first one, underperforms. 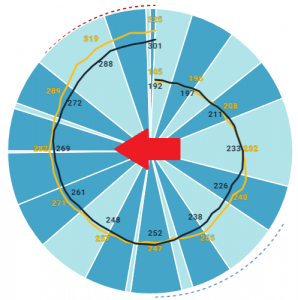 Here our client tries to go for four songs in a row with small sweepers in between. And though it gave positive results after the four songs it is worth noting that had they stopped after two or three of these songs, they would have only barely broken even. 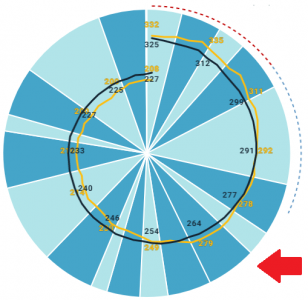 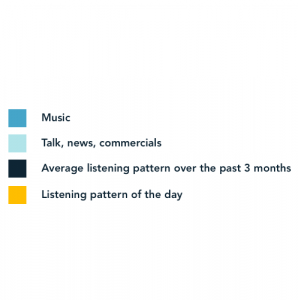 In this last example it is a simple two-in-a-row we are looking at. With a clear negative result – and this despite the fact that the station doesn’t normally do two-in-a-row at this time of day. So in other words the music sweep is outperformed by talk and regular programming.

So what does all this mean?

Well. Put simply and generalizing a little the structural impact of music sweeps is very limited if it even exists at all. The all-important factor to be successful with a music sweep is the same as when playing a single song: play the right music.

Despite the fact that I love the romantic memory of the consultant riding in on his audio horse and saving the day. Although he made did not made a valid point on music sweeps. It isn’t valid in 2019, anyway. And if it ever was, then those days are far gone with the excess of audio products available to listeners today.

You see, if music back to back is what the listener wants, why would they settle for two or three songs they didn’t select themselves? They can go eternal-back-to-back if they want.

When it comes to the other main point the Mr. Cool of radio was trying to make back then – cutting the music catalogue to the bone – that idea is also failing. But that is a different story for a different day.

What do you think of this article? Let us know!

Learn more about the Clocks Function of RadioAnalyzer and how it works.